On Saturday, just after noon, almost 1,000 people gathered at the URBN headquarters in Philadelphia’s Navy Yard to support Alex’s Lemonade Stand and feast on food from some of the best chefs in America.  The Great Chefs Event, in its 13th year now, experienced some changes this time around but still retains its title as the best food event in Philadelphia. 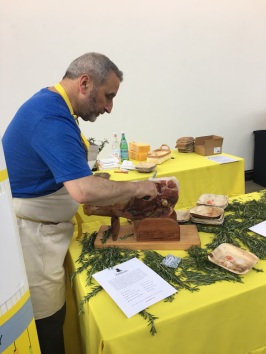 The three most notable changes were switching the event from a Tuesday evening to a Saturday afternoon, allowing children, and not selling tickets to the afterparty (which was restricted to only chefs, sponsors, and volunteers).

Not being on a Tuesday night and not being at the afterparty until 2am drastically improved the way I felt the day after the event, so I don’t have much to complain about there.  Allowing children, however, made navigating a bit of a trial.  While I understand allowing children at a fundraiser for childhood cancer, I also think the same lady with a two-person stroller was moving slowly in front of me the entire event. 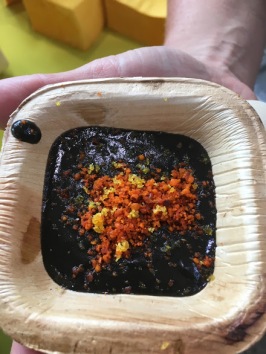 One of the nicer changes, though, was the addition of an outdoor beer garden full of local breweries.  Victory, 2SP, Dogfish Head, Twin Lakes, Second District, Stoudt’s, and of course Sly Fox with their Alex’s Lemonade beer were all easily accessible and the never-crowded space was the perfect foil to the bustling inside.  And while it did get a little warm in the early afternoon, it’s hard to complain about that when it seems the rain in Philadelphia this year hasn’t stopped since March (and didn’t start until after the event had ended). 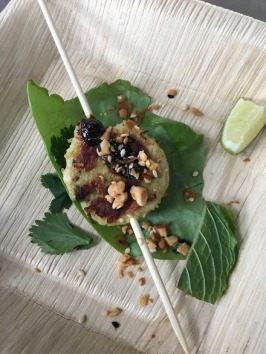 Back on the inside, though, was the same wonderful time as always.  Food vendors—and quite the line-up of which—lined the halls and the main room of the beautiful URBN space.  Michael Cimarusti was the first in line as guests entered the hall with a lobster mortadella sandwich—the perfect size for starting the day, but something I would have had trouble fitting later in the afternoon.  Also present were celebrity chefs Chris Cosentino, Jonathan Waxman, and Bruce Kalman of recent Top Chef fame. And despite my known stance on cheesesteaks, Cosentino’s tripe cheesesteak, nicknamed the “Stomach Grinder,” was one of my favorite dishes of the night. 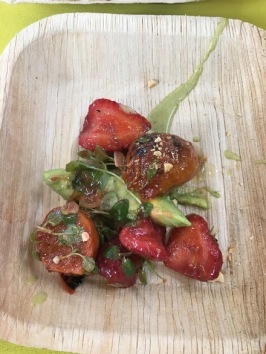 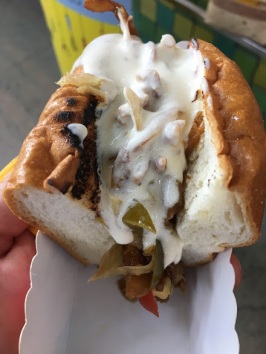 Other favorites were Yehuda Sichel’s Montreal-style short rib sandwich, representing Philadelphia’s Abe Fisher with as delicate a piece of meat as I’ve had, held together by two pillowy-soft pieces of bread: you wouldn’t have needed teeth to eat this.  Another top pick was Gavin Fine’s seared sea scallops with ginger-soy butter, watercress, tobiko vinaigrette, and fried shallots.  Despite Jackson Hole, WY not necessarily being known as a top seafood destination, Gavin clearly knew what to do with this perfectly seared mollusks.  Finally, Vinny Dotolo and Jon Shook’s cavatelli with fennel sausage and cavolo nero, despite being quite the heady dish near the end of our eating, was absolutely delicious.

About two hours into the eating was a short presentation, as there is every year, from Jim and Liz Scott, the parents of the titular Alex from Alex’s Lemonade Stand, with an update on their fundraising and some personal stories.  They also had a current childhood cancer survivor tell his story before the real fundraising of the day got down to business: a charity auction for some big-ticket items.  The largest of them was Marc Vetri and Greg Vernick coming to your house and cooking for a dinner party of 12, which sold for a whopping $10,000.  The five large auction items raised over $50,000 for the foundation on their own.

The annual event should be attended by anyone who can make it: you are able to support Alex’s Lemonade Stand Foundation, eat amazing food, rub elbows with some of the top chefs in the country, and hang out in URBN’s beautiful space.  There are myriad silent auction items and raffles.  The list goes on for all the great things that happen here over the space of four hours on a Saturday afternoon, and I suggest you check it out for yourself.

If you were unable to attend the event but would still like to support Alex’s Lemonade Stand Foundation, you can click here.  There is also a Great Chefs Event in Chicago on August 13, and L.A. Loves Alex’s Lemonade in Los Angeles on September 9.

I don’t usually post my own food, but I made four pizzas tonight and I’m really happy with all of them. Clockwise from top left: sautéed mushroom melange with taleggio and black truffle; Brussels sprouts with salami and pickled shallots; combination pizza (mushroom, pepperoni, green pepper, mozzarella); caramelized broccoli and red onion. Top two are white sauce, bottom two are red sauce.
Stopped by @curdiologist because there isn’t much else to do in Love Valley, NJ. This is also probably the most traveling and eating I’ll do for a while. Picked up some pieces of the tartuffo, smokey shepherd, Szechuan, and Valley Thunder clothbound cheddar. All are excellent.
Ride recovery. Follow me for more cycling tips.
Stopped at @whiteducktacohvl to kill some time before our cabin is ready and to also get out of the rain. Lunch was bulgogi beef tacos with house-made kimchi, Bangkok shrimp tacos, Thai peanut chicken, and jerk chicken tacos. Top notch.
Back on our first night in Asheville, we needed something quick and filling, so we hit up @mellowmushroomasheville. Outdoor seating, spaced well, and lots of carbs. We got their local Thai Dye pizza (with curried chicken, cucumbers, and Thai chili sauce) and the Holy Shiitake (variety of mushrooms, caramelized onions, garlic aioli swirl, black truffle oil) and some spinach artichoke dip to make sure we got plenty of vegetables. I know it’s a chain, but it’s a damn good one.
Dinner tonight was a mess o’ BBQ thanks to Hawg Wild BBQ here in Brevard. I got a three meat combo of western pork (with a tomato-based sauce), eastern pork (vinegar-based) and beef. It came with fries, hushpuppies, and slaw. We also tacked on an order of fried pickles and of course had a @brevard_brewing_co Pilsner and Red Ale. Refueling: complete.