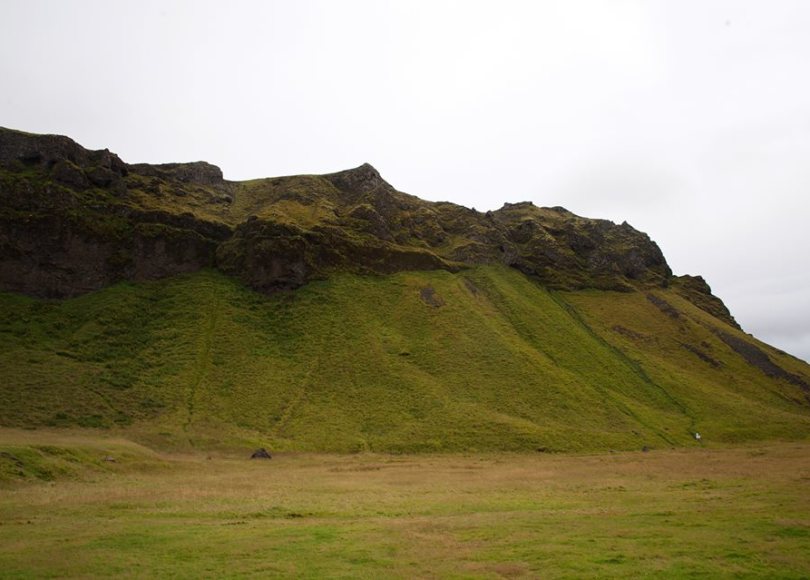 We arrived at Keflavik early on Saturday morning, tired from a shitty, overly warm flight from Boston that had no air.  After we made our way through the maze that was the airport—mistakenly ending up in a departure area where we couldn’t even buy a coffee—we found our way out and stopped for “breakfast” in what amounted to an airport 7-11, and then we waited around until it was time to pick up our van.

We had decided to rent a van to camp around Iceland for the long Labor Day weekend, taking advantage of some flight deals and also going during a bit of an off-season.  This was also the first time LeeAnne and I had traveled with others, as our friends Beth and Andy were able to join us for the long weekend—somewhat of a feat, as convincing Beth to spend three nights in a camper van wasn’t the easiest thing to do.

When it was finally time, we hauled our stuff across the Keflavik parking lot to Go Iceland, the van rental company.  This included not only our bags, but also the case of beer and bottle of Laphroaig we’d picked up in Duty Free.  Since alcohol is so heavily taxed, it makes sense to stock up in the airport rather than buy it along the route (although we ended up doing both, because beer).

Our first stop was a local grocery store Bonus to pick up food for the trip (everything is expensive in Iceland), and also to stop at an adjoining restaurant for sandwiches, pastries, and more coffee. After loading up, we headed out, admiring the constant countryside despite every minute being overcast and threatening rain (and often delivering).

Other than needing to camp at Skaftafell campground, we had no plans for the day.  After some driving, we happened upon Seljandsfoss waterfall, which looked nice, so we hopped out to stretch our legs and take some pictures.  The weather was cool and cloudy—but still bright—which is ideal for me.  After a quick trip to the waterfall, we hopped back on the road until we came to the next one: Skogafoss.

As far as famous waterfalls in Iceland go, Skogafoss is right up there near the top of the list, thought the waterfall itself isn’t nearly as impressive as what’s behind it.  Even though it started to rain, we climbed the metal staircase next to the falls to get to the top.  What I expected to only be a view from the top turned out to be so much more: behind the falls, winding for what seemed like forever, was a beautiful path next to cliffs surrounding the river that lead to the falls.  Even with the rain, the area was magical: it felt like you could walk all day and around every bend would be a different view of something incredible to look at.  Being in the rain, not liking heights; none of it seemed to matter back there.

We eventually made our way down, soaked, as the rain let up.  We decided to stop into the adjacent restaurant at Hotel Skogafoss for some drinks and snacks as we waited to dry out.  I started with an Icelandic beer I loved, Lava, a smoked imperial stout from Olvisholt brewery.  Despite being able to get it in Philly (and for less money than in Iceland), I had to drink it in its home.  I also tried a Snorri No. 10 from Borg Brewery based solely on the fact that a friend has a cat named Snorri. 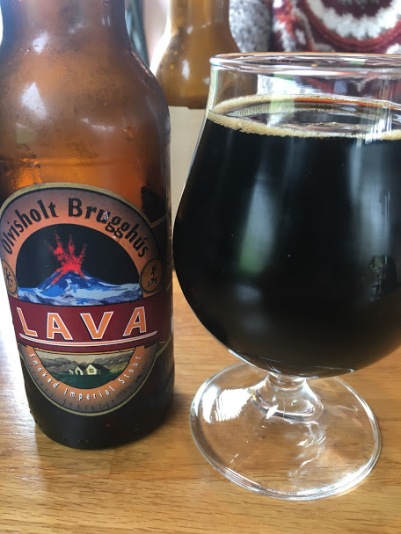 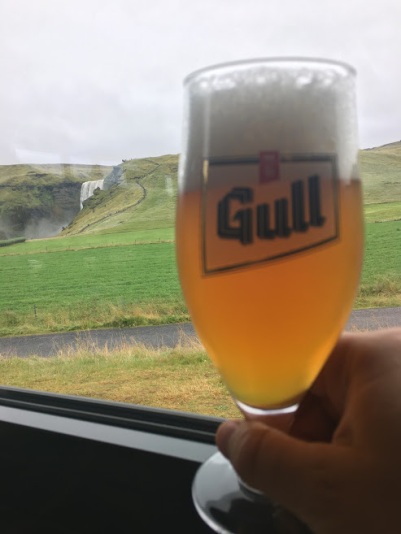 We continued on and happened upon Laufskálavarða, which was incredibly creepy at first glance.  Hundreds of small rock stacks line the field, looking a bit like something out of the Blair Witch Project.  A sign nearby says the area used to be a farm, but was wiped out in the first recorded eruption of the volcano Katla in 849. Now, travelers add a rock to a pile for good luck—and from the looks of things, there had been plenty of people with good luck.  The rock stacks went on in all directions.

We finally pulled into Skaftafell campground as it was getting dark, converting the middle of the van to a small kitchen area with a table to have our dinner: bread with peanut butter, grapes, Gull beer, and Laphroaig.  The back end of the van then converted to a bed, with the top popping out to make a top bunk as well, so all four of us could sleep.  We tucked in for the night, exhausted from a full day, with more to come tomorrow.

Note: The van from Go Iceland was really incredible, and included everything you could imagine.  Pillows, sleeping bags, a small electric stovetop, a refrigerator, cups and silverware and other camping gear, and 5 GB of wifi (which the four of us weren’t able to use up on our trip).  It made the trip so much more comfortable and enjoyable than I would have expected.

The featured image is courtesy of Beth Blinebury.

See how we fare on day two.

I didn’t know what to get, so I got it all. Two frikadelle, two schnitzel, three sausage, sauerkraut, red cabbage, spaetzle, and mashed potatoes. All delicious.
Our two nights of camping at the Grand Canyon were excellent. They included some wildlife sightings, a hike three miles down into the canyon, a sunrise, and endless amazing views. I randomly picked some of the pictures, because they’re all amazing and epic and none of them do it any justice.
I would try to describe this to you, but when it comes to the Grand Canyon, I have to quote Rafi from The League: “Words are bullshit.”
As a huge @toolmusic fan, when @ktgoeshiking proposed a camping trip to Arizona, I agreed only if we could stop by @merkinosteria. Even as a fanboy I was very impressed with the wine, the food, and the dedicating to local farm-to-table everything. I had the Shinola Orancia (orange wine), Shinola Rosado (rosé), Tarzan Red, Chipacabra (red) and Helio Dolce Dessert (fortified red wine) and we are a bruschetta, gnocchi (the second best I’ve ever had), cacio e pepe, and some Merkin gelato (vanilla bean, bourbon, and pecan as well as malvasia and lavender). Definitely a side trip well spent.
Great day in and around Vegas with @smack.hudak and @twinkie_chick. Included a stop at In-N-Out for a 4x4 animal style, a donut ice cream sandwich, drinks at @hopnutsbrewing, @servehzah, @hudlbrewing, and @nevadabrewworks, and a trip out to Red Rocks Canyon. All with beautiful weather.
I haven’t been traveling, but I have been eating. I figured I’d share some of my food here since I’ve got nothing better to post about. This one is sausage with mustardy lentils and a celery-parsley salad recipe care of @mollybaz. Delicious.