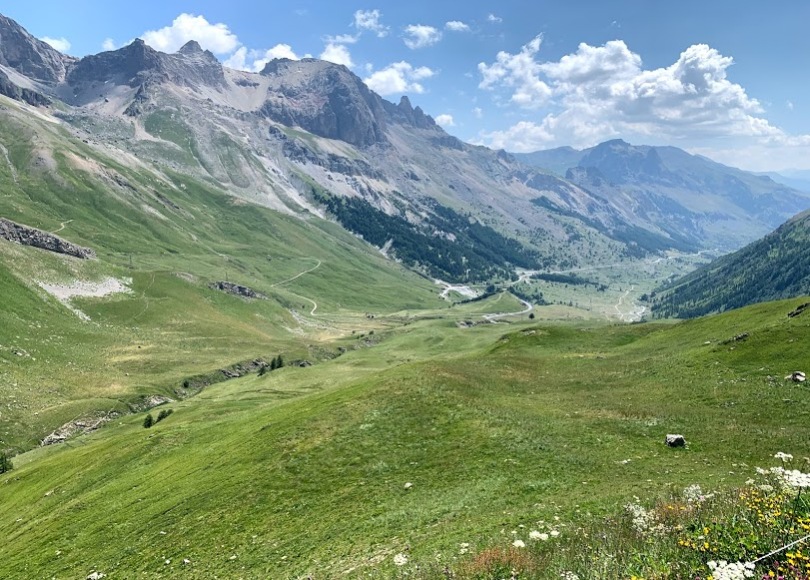 We all woke up early, around 6am, and packed everything we’d need: the meat, cheese, bread, and snacks we’d bought the night before, as well as a selection of beer we’d carried with us from Belgium.  The day, Thursday, July 25, was the highlight of our Tour de France trip: the mountain stage.  We’d get to the highlight of the stage, the Col du Galibier, early enough to make our way up and stake out a prime viewing spot where we’d wait for the whole to-do of the Tour to go by. It was only a 30-minute drive from our AirBNB.

We had to park about a kilometer away from the start of the mountain, but we eventually made it to a great spot where we could see any oncoming action for quite a while—we were there to get our money’s worth.  On our way up, we switched on and off who carried our cooler full of goodies and stopped occasionally to rest and to cheer on the hordes of amateur cyclists trying to conquer the Galibier. It looked like some of them really needed the extra motivation.

We set up our camp around 8:30 or 9am and began our long wait in the sun.  The Tour de France caravan wouldn’t arrive until about 2pm, and the riders themselves between 4-4:30pm.

The team buses coming through amazed me at what good drivers these guys were—I would later find out that I’d never be able to take a bus around some of these mountain passes. The caravan was the same thing: it would have terrified me to drive those huge, unwieldy parade floats around some of the curves on the mountain.  But it did give us our last chance to pick up some cheap souvenirs and trinkets and get us excited for the cyclists that would be coming through shortly.

Eventually, we heard the television helicopters in the distance and got ready. We had gone for a walk earlier and saw we were very close to the sign that signified 25km to the finish line, so keeping track of where they were on the Tour de France app got us even more excited as we counted down—40km, then 35, then 30. A helicopter appeared, and we could see the breakaway group on the winding road beneath us. We watched it snake its way through the crowd-lined road, and as the four or five riders were on the portion of road right below us, we saw Nairo Quintana put on a burst of speed and leave the others behind. We got into position to wait for the leaders to round a bend.

I always thought I would take the opportunity to be one of those guys who ran beside the riders, but Nairo positively flew by us, followed by Romain Bardet and the rest of the leaders.  We cheered them on, and chatted excitedly while waiting for the peloton.  Once the main group was by us, we waited for the grupetto, or the back end of the race.  A car coming up announced that the group behind him contained fan favorite Peter Sagan, and we all cheered him on as he went by.  As someone who cycles (poorly), it still amazed me how fast even the stragglers were going up this mountain.

As the final riders were going by, the sky began to darken. We put on our rain gear, and there was a light sprinkling rain for part of our descent back to the car.  Nothing too bad, but we could see some intermittent lightning back in the direction of our AirBNB. Taking different routes down, we all met up back at the rental car, where we pulled out and got in line to head back home.

The line of cars barely moved, but it did move.  Every once in a while, an emergency vehicle flew by in the opposite lane, and we figured there had been some fender-benders in the rain and rush to get home. We made it back to La Grave, a small town about halfway between Les Deux Alpes, where we were staying, and the Col du Galibier when we noticed the line of cars only seemed to be moving when a car came back our way.  Then we noticed cars in our line starting to turn around.  Uh oh.

We turned around and pulled into the first open parking lot we saw and headed into a hostel/restaurant called Gite Le Rocher in order to sit down, use the WiFi, and get some food.  They had a prix fixe menu of vegetable soup, goat, and a dessert, but at this point I was getting too nervous to take pictures of my food (a first).  We were originally told by the hippie-looking woman in charge that the roads would be closed for about three hours due to a landslide caused by the rain.  When Beth had her husband back home get online and check (the WiFi turned out to be bunk in the restaurant), he found that the roads being closed for three DAYS was a generous assumption.

We realized, now nearing 9pm, we would have no other option but to take a detour back to our AirBNB. It was starting to get dark, we were all tired from an entire day spent sitting in the sun and drinking, and I was the only one on the car’s insurance, so it would be up to me to take the four-hour detour over the Galibier, over the Col du Glandon, and back to Les Deux Alpes.  Did I mention I’m afraid of heights?  We got ourselves psyched up and walked back to the car, where we realized the building we had parked by had become a temporary shelter for people who had cycled from the area of Les Deux Alpes to the stage and couldn’t get back.  It was a huge inconvenience for us, but at least we had the means to drive over the mountains in the dark—these people were completely stranded.

King of the Mountain

We threw on some podcasts—I wanted something my brain would have to pay attention to, rather than zoning out to music—and headed back the way we’d come.  The line of cars at the base of the Col du Galibier was long and slow-moving, and by this point it was pure nighttime. We eventually made it to the base of the mountain, and my nerves kicked in. If I’d had my own car, which is smaller and something I’m more familiar with, I would have been a lot more relaxed, but I was convinced the SUV we had was going to roll off the edge of the mountain any minute as we climbed higher and higher.

I didn’t care about the people behind me who probably wanted to drive faster, and I only moved from the center of the lane when there was oncoming traffic (and once almost not quickly enough, as we were almost hit head-on by someone coming around a sharp bend). Beth and Kelly, both manning phones for directions, kept me braced on when a particularly sharp bend was coming up and what I had to expect, while Ray fell asleep in the back seat—after he made sure to point out how steep one of the climbs we were coming up to was.

Luckily, the Galibier has a tunnel cut through about three quarters of the way up, so we were able to skip going over the peak of the mountain.  This, and the fact that it was so dark we couldn’t see the drop-offs next to us, are probably the only things that kept me from a full-on nervous breakdown on the ride. After the tunnel was a downhill portion leading into the town of Valloire, which gave us an up-close view of the Tour route that we wouldn’t have otherwise received. I could have done without it.

Whenever there was room, I moved over and let all the antsy drivers behind us pass me, but if we were going up or downhill, I didn’t care how mad they got, I wasn’t getting close to the edges.  If one of you was behind me, sorry not sorry.

After two climbs and two descents, we were back on the highway for a portion, and then once again ascending to Les Deux Alpes. We rolled into the area of our AirBNB and found the last parking spot around 2:30 in the morning, almost immediately before a car behind us pulled in, no doubt in the same situation.

It took a while to get to sleep, because my adrenaline was going full blast and my nerves were on edge.  On our way back to La Grave, sitting in traffic, I had nodded off once or twice due to being so exhausted, but on the haul back I’m not sure I closed my eyes once—I knew it was up to me to get everyone home safe, and I knew I had to stay awake and stay calm.  As much as I wanted to panic (and, at some points, full on cry), panic wasn’t an option. We got back into our room, cracked a beer, and calmed down.  What had been a memorable day of watching the Tour de France became one of those unforgettable days of a trip where things go just wrong enough to make it exciting, but not so wrong as to ruin everything.  Had we ridden bikes from our room to the Galibier, I may be singing a different tune, but as it stood we had the ability to get back safely. And the day went a long way to reinforce one of my favorite sayings: it’s always an adventure.